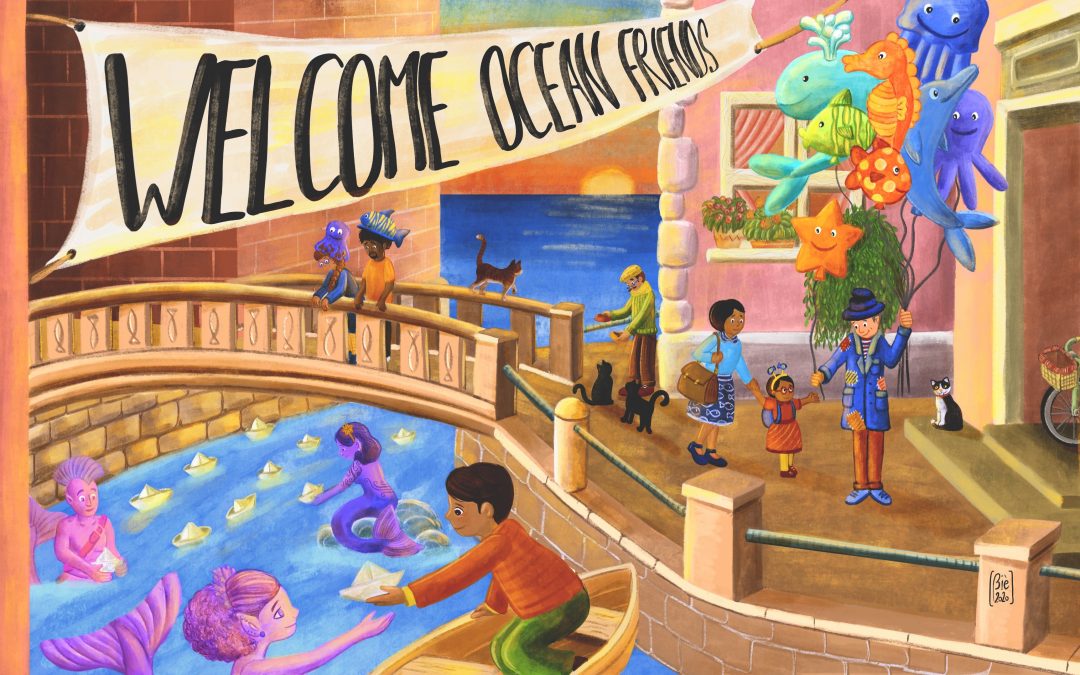 I just finished adding a new piece to my portfolio and wanted to share with you how this piece came to be. It actually comes from a different approach than what I usually take. I was watching “Le Notti Bianche (White Nights)” a 1957 black and white movie by Luchino Visconti and I was struck by the beauty of the framing and of the lighting. I have been trying to look at movies for ideas for setting and composition, especially when looking at the masters of cinema.

The movie is set in Venice and this scene particularly struck me:

What I liked about it was the composition and the framing, so I started drawing the same setting, although in a different lighting.  The man holding the balloons is in the same spot that Marcello Mastroianni is standing on in the picture and the buildings are largely the same.

From there I let my imagination go and imagine a version of Venice in which humans and merpeople live together and work together and a festival in which this friendship is celebrated. All towns in Italy have a day of celebration, a local fair, a day of city pride for a particular product made in that town or for a favorite activity so that is probably where the idea came from as well.

Then, of course, I added cats because I love cats and in particular I always add a black and white cat. I used to have a cat called Spuzzi that was like that I always try to sneak her in my pictures if I can!

I have been told that there is a LOT going on in my images and it is true. I think I always liked those pictures in which you can look for a while and notice multiple little things, sort of a “Where’s Waldo” effect in which the more you look the more you notice. Should I try to reign in the amount of characters and elements I add to every picture? Or should I keep going this way? Being an illustrator/artist is full of though choices….